If you like this game, try Police Supercars Racing Recharged.
Categories: Racing Car
Screenshots and Hints 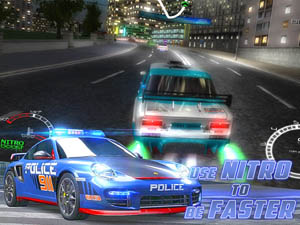 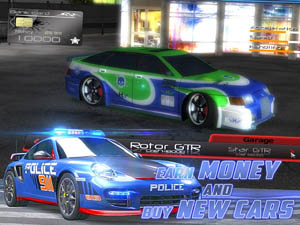 Game Description
3D street racing game over the night city. Street racers organize illegal races through the streets of the night city. Only valiant servants of law and order can stop this lawlessness. Choose the side you like more and go through all the stages of the game. As a street racing driver, you can earn money by winning races, taking part in higher leagues of street races. Spend earned money on a new car, each time buying an increasingly fancy vehicle. As a driver of a patrol car, you can stop the drivers who endanger other road users with their actions. The use of nitro accelerators in both roles will provide the path to victory.
System Requirements
Windows XP/Vista/7/8/8.1/10
DirectX 9.0 or higher
Attention
This game, like other games on our website, is provided free of charge legally, as it was licensed or sublicensed to us by a game developer or a game publisher, or was developed by our internal game development studio. Distribution and modification of this game and promotional materials without our permission is prohibited.